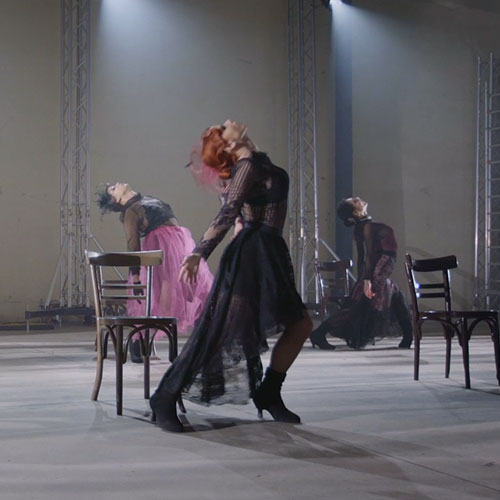 It was a cold and humid night at the end of December when I got a phonecall from a lovely voice. It was Dimitra Kastellou, a magnificent choreographer, founder & artistic director of “K's Blink” team. She told me that she heard my music and asked me if I would like to contribute to her upcoming videoclip. She wanted to start the rehersals in less than a week. Because she was worried that it would be difficult to have something complete in such a short time, she asked me if I had somethig "ready" made. The story was about eight danseuses in a Second World War decadent Paris, reciting each their dark and uttermost past with nothing but a chair to hold on to..

I was already compossing at that time for another theatrical play. But Dimitra's passion, even though we did not had met yet, gave me enough inspiration to present her 5 waltzes as ideas in piano in just two days.

Raisa Popailidou gracefully combined with her violin the feeling of classical nostalgia with a pinch of gipsy temperament. Sophia Voulgaridou with her accordion drew the occupied Parisian scenery and the on the fifth day the whole composition was ready for the rehersals.

A month later came the shooting day. Dimitris Stambolis, an experienced cinematographer had prepared the stage. Though I have done many video dance projects, at the end of each and every one I stand in awe in front of the performers. More than ten intence hours in a cold warehouse performing their maximum without any complain or dissatisfactions. This admirable deed I had to respect giving my best to the editing and coloring of the clip.